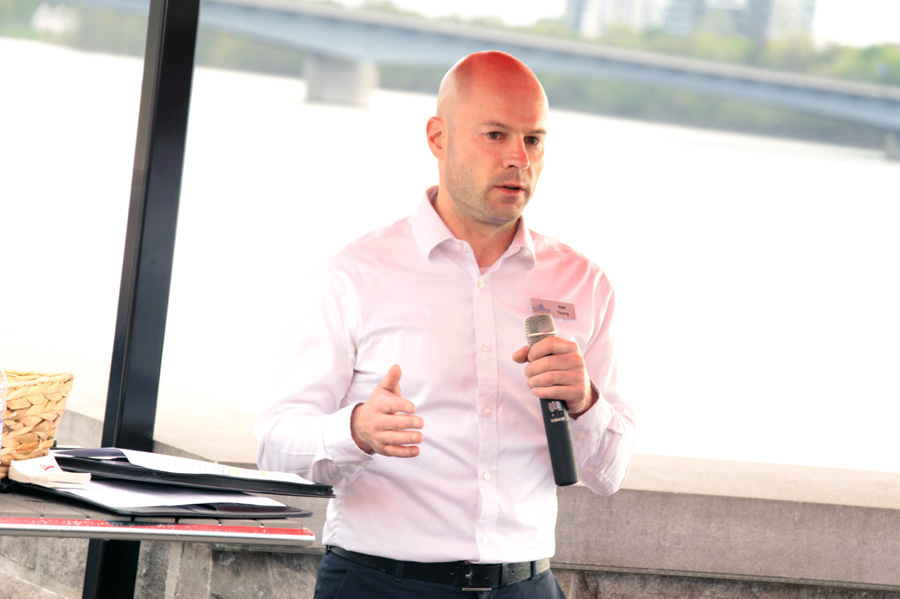 It was a tad chilly but at least the rain stopped in time for a special reception hosted Tuesday night by the YMCA-YWCA National Capital Region at one of the best outdoor patios in town, Tavern on the Falls.

Close to 100 guests turned out to the 6th Annual Chair’s Round Table gathering, held for donors who make annual contributions to the local Y of $1,000 or more.

Guests enjoyed snacks and drinks while mingling and taking in views of the Ottawa River and Gatineau Hills. Patio heaters and fire pit tables kept everyone warm and cosy while spring continues to procrastinate.

There was no getting lost trying to find the place; guests needed only to follow the chalk drawings and arrows on the pathway, and the bright balloons. Tavern on the Falls is located next to the Royal Canadian Geographical Society’s new headquarters at 50 Sussex.

The event featured Matt Young, services manager at Rideauwood Addiction and Family Services in Ottawa, speaking about the link between excess technology (such as cell phones, social media platforms and gaming), inadequate amounts of sleep and insufficient recreation amongst developing children. As of a few days ago, the World Health Organization officially recognized “gaming disorder” as a mental health condition.

He was knowledgable, as proven by his ability to soldier on after part of his speech blew away and disappeared down into the river.

“The results of tech, both on our social behaviours, academic and professional behaviours, are all day long, and all year long,” said Young. “This is not something that we use intermittently. It is part of almost every behaviour that we engage in.

“With recreation, we find that that’s an opportunity to get out of that area, if you will, where the cell phone gets put down.”

The message he left his audience with was: “Until the level of support for young people struggling with technology use meets the level of current access they have to that technology, we as a community have work to do.”

Attendees included Jim Taggart, chair of the Taggart Group of Companies, and his wife, Jane Panet.

Taggart’s connection to the Y stretches back to his childhood, when his mother was president of the former West Ottawa YMCA at Gladstone and Parkdale. He used to take ballet lessons there. “My mother was trying to culture me,” Taggart laughed. “That didn’t work very well so then she got me learning to play the violin. I got to the point where I could play Twinkle, Twinkle Little Star and that was the end of my career as a violinist.”

In later years, Taggart formed friendships with like-minded business people at the Y on Argyle Street. It was renamed the Taggart Family Y in 2011.

In 2012, Taggart Group was recognized for its contributions to the Y at the AFP (Association of Fundraising Professionals) Ottawa’s annual philanthropy awards dinner.

On hand were the YMCA-YWCA National Capital Region’s president and CEO, Bob Gallagher, and board members, along with its vice president of financial development, Jack Silverstein, and Meighan Hartley, manager of donor stewardship and annual giving. She thanked guests for their financial support before sharing with them her recent conversation with a young woman, who, at the age of 16, found herself homeless in Ottawa. She was referred to the Y’s youth shelter. During her time at the shelter, she was able to graduate from high school, obtain a job, and get to college. She recently moved out and is now living on her own in a permanent residence.

“It’s really exciting listening to people talk about their experiences,” Hartley told the room. “No matter what program they’ve been through, no matter what brought them to the Y, there’s always one common thread that runs through their stories, and that is the sheer gratitude they have for the people they met at the Y and the opportunities that they were given.”